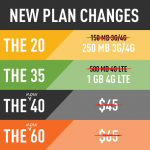 Recently Giv Mobile announced via Facebook some changes to its cell phone plans.  It's $20 plan got a data boost from 150 MB to 250 MB of 3G/4G (HSPA+), while the $35 plan got a boost from 500 MB to 1 GB of 4G LTE.  Previously $45 and $65 plans were offered that included 2GB and 4GB of 4G LTE data respectively.  Those plans however got price reductions to $40 and $60.  All plans include unlimited talk and text, while the $40 and $60 plans also include unlimited data although at reduced speeds of 64-128 kbps once the high speed allotments are used up.  Plans also include varying amounts of international calling credits as summarized in the below graphic.

Giv Mobile  offers no contract cell phone plans that operate on T-Mobiles native network (no roaming).  The MVNO is unique in that it donates 8% of your cell phone bill to a pre approved charity of your choice.  Through April 24th you can get 10% off any order with free shipping with code GIVE2GET10.